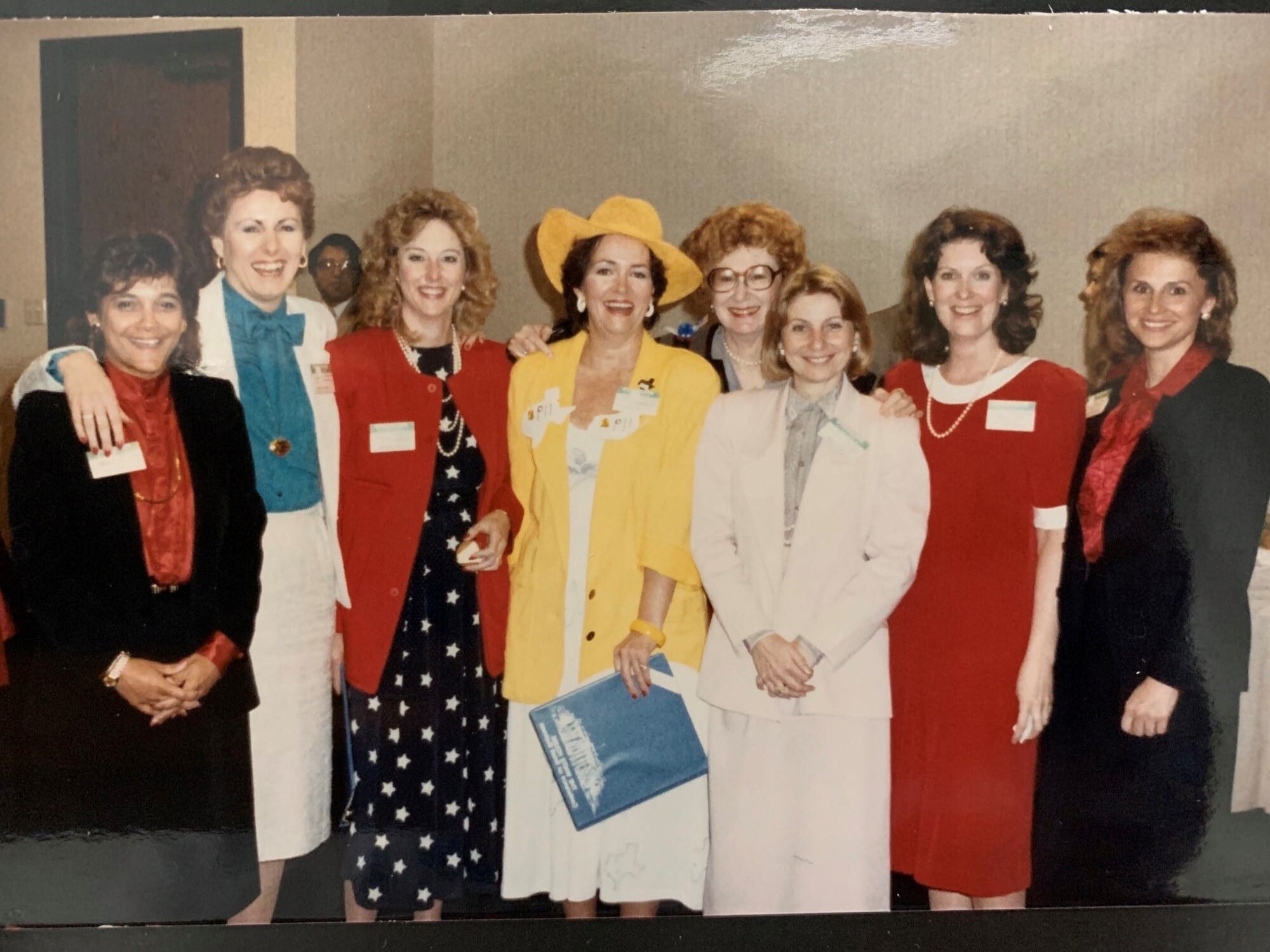 Women entrepreneurs elected to the White House Conference on Small Business in 1986.

The history of women entrepreneurs in this country is  a big deal for us here at our companies, Imprimis, FreemanLeonard, BravoTech, and ANSERteam.  Since I am the long-time woman founder of these businesses, I am encouraged to see more and more women entering the “entrepreneurship world”  and realizing the potential that took years to develop.  Even though women have owned businesses going back centuries, the experience and skills that today’s woman business owner has developed through the generations makes growing a billion dollar and beyond business a real possibility.  We’ve come a long way, baby!

In honor of  Women’s History Month, I am going to reflect back on the achievements of entrepreneurial women in history and right here in Dallas, Texas.  One of the common tenets for women coming of age in any generation is that political, cultural, and social movements have always fueled women’s imaginations and inspired their business creations.

From the 1870’s through 1920, women became leaders in social, political, and business movements.  In 1873 Lydia Pinkham brewed her Vegetable Compound from five herbs – pleurisy root, life root, fenugreek, unicorn root and black cohosh and launched the Lydia E. Pinkham Medicine Co., a home remedy business run by and for women. She was the first woman to put her own likeness on her product.  Madame C.J. Walker became the first Black woman millionaire in America with her line of hair care products. Coco Chanel took the industry by storm, popularizing comfortable, yet fashionable women’s clothing including what we now know as the “little black dress.”  Elizabeth Arden singlehandedly established the American beauty industry in 1910.

The famous acress, Virginia Payne, brought the character “Ma Perkins” to life in more than 7,000 episodes of her radio soap opera.  Her character was a self-sufficient widow who owned and managed a lumber yard and created a new model of female entrepreneurial success for a generation of young girls.  At the same time, a real widow, Olive Ann Beech, co-founded Beech Aircraft Corp. with her husband and took over after his death.  She grew the business and many of their Model 17 Staggerwings were manufactured for the U.S. Army during WWII.  Rose Blumkin founded the Nebraska Furniture Mart in 1937 and sold it to Warren Buffet’s company in 1983.  Warren Buffet said about Rose “Put her up against the top graduates of the top business schools or chief executives of the Fortune 500 and, assuming an even start with the same resources, she’d run rings around them.”  In 1938 Gertrude Boyle founded Columbia Sportswear Co. In 1989, Gert Boyle, stepped down as president of Columbia, allowing her son, Tim, to take Columbia into the 1990’s.  She passed away at age 95 in 2019.

From 1940 to 1945, the percentage of working women in America rose by almost 10% due to male enlistment in the war leaving gaps in the workforce.  The movement wasn’t just Rosie the Riveter types; female entrpreneurship boomed, with women starting home-based businesses, many of which aided the war effort.  After the war, many women continued their businesses.      Ebby Halliday, considered The First Lady of Real Estate, started  here in Dallas in 1945 and grew it into one of the largest independently owned residential real estate companies in the nation.  Ebby  was a mainstay in the civic and cultural life in Dallas until she passed away at the age of 104 in 2015.  In 1940, Deborah Szekely founded Rancho La Puerta in Tecate, Mexico and in 1958 founded the exclusive retreat, Golden Door Spa in Escondido, California  to teach nutritional, meditative and lifestyle habits.  The spas were sold in 2012  to Joanne Conway, wife of billionaire Bill Conway.  Deborah is currently age 98 and lives in California.    In 1946 Estee Lauder founded her skincare company which went public in 1995, and she was given the title of founding chairwoman.  She passed away in 2004 at the age of 97.

In the age of domesticity, the home became a source of inspiration for new businesses and new consumer goods that would enhance the lives of people.  Women capitalized on this movement, creating home-based businesses while taking care of homes and families. Eventually some of these businesses grew out of their homes and made millions.   Lillian Vernon launched her catalog while pregnant with her first child from her kitchen table in 1951.   Her company became the Lillian Vernon Corporation in 1965 and went public in 1987 – the first company to be founded by a woman to be publicly traded on the American Stock Exchange. She passed away at the age of 88 in 2015.    In 1956 Bette Nesmith Graham invented Liquid Paper (originally called Mistake Out).  She grew the Liquid Paper business right here in Dallas, Texas.  I even remember going on a tour of her facilities in Dallas in 1979 (?) and being so impressed with what she had accomplished.  Then at the age of 56, Bette passed away from a stroke.  Her son, Michael Nesmith of the Monkees, kept the business going until it was sold in 1980.  In 1957, Mary Crowley, another Dallas entrepreneur started Home Interiors and Gifts in 1957 and it became one of the largest direct sales home furnishing operations in the U.S.  She passed away in 1986 at the age of 71.  In 1956, attorney Louise Raggio, here in Dallas, Texas joined her husband Grier to establish one of the country’s top family law firms.  At the time there were no jobs for women lawyers so the few women who graduated from law school started their own firms.  Louise is credited with changing the laws in Texas to finally allow women to own property in their own names.

The women’s movements in the 60’s gave women renewed purpose and a sense of power to pursue more entrepreneurial ventures.  Many were founded around feminist principles – Ms. Magazine, Feminist Press and many were starting to break into areas not traditional female categories.  In 1969 Judi Sheppard Missett started Jazzercise, a new take on dance and exercise, combining the two for people who were not trying to be professional dancers.  She started franchising her program, and has built it into a $100 million business which at age 75, she still runs.   In 1965, Ruth Fertel bought Chris Steak House in New Orleans with no experience in the restaurant business and in 1977, sold her first franchise which ballooned into over 80 locations in the U.S. and overseas.  She sold the chain in 1999 after becoming ill and she passed away in 2002 at the age of 75.  In 1967 Muriel Siebert opened her company, the first woman-owned brokerage firm in New York City and the first woman to own a seat on the New York Stock Exchange.  She was a trailblazer who died in 2013 at the age of 84. Mary Kay Ash founded Mary Kay Cosmetics here in Dallas in 1963 and it became the 6th largest direct marketing firm in the world in 2018.  She passed away in 2001 at the age of 83.

This is where the low tide becomes the tsunami with the rapid growth of woman owned firms.  A huge bubble of women started their first businesses in the 70’s and 80’s fueled by the momentum of the women’s movement from the 60’s, increased experience in business and an intense interest in being financially independent and charting their own path. In 1975 the National Association of Women Business Owners formed in Washington D.C.  NAWBO was responsible for the first Women’s Business Conference in Houston, Texas in the 80’s; the first National Public Affairs Days and in 1988, was instrumental in the passage of HR 5050 the Women’s Business Ownership Act which boosted women entrepreneurs’ access to capital.  The legislation led to a 30 percent surge in the number of women-owned businesses over the next 20 years.  NAWBO was also responsible for the creation of the National Women’s Business Council, SBA Office of Women’s Business Ownership, the Women’s Business Center Program, the Center for Women’s Business Research and the National Foundation for Women Business Owners.  The Dallas Chapter of NAWBO started in 1985 and I served as President in 1986-87.  The Dallas Chapter was a great organization that helped women business owners learn, solve business issues, make contacts, grow their businesses and advocate for change. Some  Dallas women entrepreneurs who started their first businesses during this time   have gone on to start more businesses – Dorthy Miller Shore, The Miller Agency in 1981 and now Prime Women Media; Catherine Marrs, Liaison Inc.  and now Marrs College Admissions Advisors; Anita Porco, Nurses Today and now works with UCP; Lin O’Neill, O’Neill Enterprises founder of many businesses, Gail Warrior Suchy, Warrior Group and now CASPR Group; and Patricia Rodriguez Christian, CRC Group and Texas Standard Commercial Construction.    Other extremely successful Dallas entrepreneurs are  Trisha Wilson, interior architectural design firm; Judy Sims founder of Software Spectrum who sold the company in 2002, and Kathryn Hall of Hall Wines.   These women and many others in Dallas and all over the U.S. were role models and pioneers for the women starting businesses today.  Because of NAWBO and the advocacy of many women business owners, the landscape for the women entrepreneurs of today has never been more positive.

In 2005, the first venture firm in Texas to provide growth capital to  women business owners, Texas Women Ventures, was started by  four women entrepreneurs.  Since then the number of venture and private equity firms who are focused on investment in women owned firms has grown exponentially and will certainly make a difference in the ability of women founders to expand.

Many of the achievements in female entrepreneurship throughout American history have been accomplished in spite of significant roadblocks although many challenges still exist.   Today, more than 12.3  million U.S. businesses were owned by women employing nearly 10 million people and generating $1.8 trillion in sales (NAWBO).  Women entrepreneurs are critical to our country’s economic stability and growth. Future history will surely show that the gaps that still exist for women entrepreneurs will be addressed and eliminated.  I am waiting!!